Senior Advisor to the Iraqi President

Greetings and thanking organizers and the chairperson for the opportunity to speak on water and food security.

Water is the most abundant source on earth covering 75% of its surface. Yet more than one billion people don’t have access to clean water due to un-even distribution, mismanagement and pollution.

1. Conflicts on water control, water sharing or management are relatively a new phenomenon. The fact that nearly two third of fresh water in world’s rivers are flowing across the borders of more than one country is a seed for conflict. From our experience in Iraq, solutions should be based on negotiations, technical approaches and population need, rather than talk on using force or by impulsive decisions.

2. High population growth, over- control on the resource by establishing major infrastructures, environmental concerns and competing demands by various economic sectors within and between riparian countries, are causes for conflicts. In the absence of mutually agreed conflict resolution mechanisms, such as water sharing agreement between nations, conflict over water is a threat to peace and stability.

3. The basic ingredients of life are water and food. If there is water, people are more likely to produce more food and have a better life. On the contrary, water scarcity is the main cause of hunger and poverty.

4. Water Security has no formal definition but the description in the Ministerial Declaration of the 2nd World Water Forum in the Hague in 2000 is widely acceptable.

It says that water security means: “… ensuring that freshwater, coastal and related ecosystems are protected and improved; that sustainable development and political stability are promoted, that every person has access to enough safe water at an affordable cost to lead a healthy and productive life, and that the vulnerable are protected from the risks of water-related hazards”.

Ministerial Declaration of the 2nd WWF in the Hague in 2000.

5. However, the definition of Food Security has been agreed upon by world leaders on many occasions, particularly during the Food Summits organized by FAO. It says that “Food Security exists when all people, at all times, have physical, social and economic access to sufficient safe and nutritious food that meets their dietary needs and food preferences for an active and healthy life.

6. Food security is not a luxurious demand but is a basic human need. Nothing so painful like an empty stomach or starving children because they have no means of getting even one meal a day. Lack of water can cause this tragic human suffering.

7. Every human being has the right to secure or produce his own food; and having access to water is the key to ensur that.

The irrigation technique, although it may be damaging to the environment some time, is the most profound human practice to ensure food production. . Irrigation can increase soil productivity by 100 to 400 times! This is why ensuring access to water is so vital.

8. Iraq is a downstream country in the great Mesopotamian valley. Historically, all the water yield in the Tigris-Euphrates basin was flowing to Iraq.

10. Unfortunately, due to war destruction and the decline in water inflows, as a result of intensive dam construction programs in Turkey and Syria, Iraq could only produce about 30% of the installed design capacity in the last 10 years and hydropower is getting marginalized further. This will be clearly felt after the completion of the Turkish Ilisu Dam on the Tigris River reducing the inflows to Mosul Dam by at least 50% of the yearly average.

11. Starting in late 1970s, neighboring countries embarked on major dam building “revolution” creating hydrological conditions that have never existed in the past.

12. In the Euphrates river, the decline of inflows reached alarming levels during the impoundments of the constructed dams of Kiban, Kerekaya, Ataturk dams in Turkey and equally the Tabqa dam in Syria.

13. The damming and diversion of waters in the Karkha and Karun rivers in Iran resulted in tragic decline in water quality and therefore environmental and wetlands services in Shaat Al- Arab and southern Iraq.

14. As Iraq agriculture is a primarily irrigated agriculture, the impact of declining water resources on food security, particularly the locally produced food stuff, has been significant.

15. In the mean-time and as food production in Iraq degraded, Iraq’s borders were made widely open for unlimited import of all kinds of food stuff from neighboring countries depriving Iraqi agriculture from fair competition and further comprising food security in the country.

In Iraq we should probably double this estimate as power in Iraq has been extremely expensive especially in the field of agricultural production due to war destruction and the inability of the authorities to resolve the electricity crisis in the country despite spending nearly $30 billions since 2003.

17. Iraq is a good example of the so-called Water, Food and Energy Nexus. They are interconnected to a very large extent and Iraq’s most recent history is an illustration of the linkages between them. This is true not only on the production side, where food production is totally dependent on water availability and both are directly impacted by the availability of energy (or the lack of it), but also on the consumption side where Iraq could afford

to subsidize the very costly Public Distribution System (PDS), or what we call (Bitaqa Tamwiniya) using the oil revenue money. Although personally I urge the Iraqi government to radically review the PDS program, I do believe that millions of poor and hungry Iraqis benefited from the program.

18. Water security in Iraq depends on a few issues, of which the most important are:

The suitable agriculture area in the world is about 2.7 Billion.ha, only about 1.5 Billion.ha is utilized for production and only about 2.5% world water is fresh water and 0.4% of it as surface water.

19. Water sharing agreements with neighboring countries, particularly Turkey and Iran to ensure accessibility in time and space because irrigated agriculture in Iraq is the main source of food. If the concerned countries are unable to solve the issue, Iraq is ready to accept international mediation where neutral third party services could be utilized. A road map to achieve proper water sharing agreements.

21. Develop long term strategy for water reforms and water management under long lasting water scarcity conditions, whether it is due to climate change impact or water management and operational plans of riparian countries.

difficulty at less than 50% of the administration cost. During 2006 a request was sent to the council of Ministers to postpone the collection until further notice and this postponement is still in existence.

23. Iraq is taking serious steps toward establishing a National Water Council to consolidate the water sector, introduce and implement radical water reforms in the country.

24. Finally, Iraq is a forward looking country and it prefers dialogue and benefits sharing mutually accepted and negotiated settlements to water issues to achieve its water and food security. 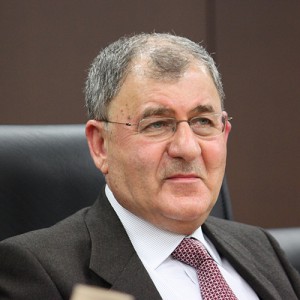 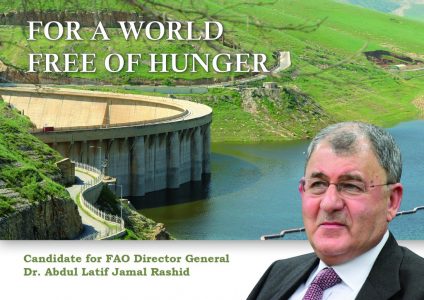